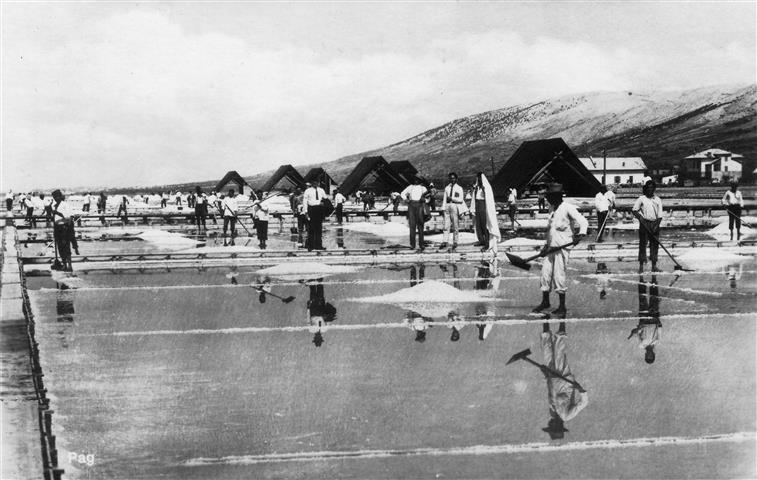 We simply do not know precisely how long salt has been produced in Pag. Salt production in the Croatian lands was first mentioned in the book about Adriatic salt pans by Prof. Candide from the university in Naples, published in 1912. He stressed that already in the 3rd century BC, the Illyrians (he meant the Liburnians) had travelled from the Croatian lands to the Apennine peninsula and taught the local inhabitants how to produce sea salt and in the process they established what is now the Italian salt plant, Regina Margarita.
The first written data on actual salt production in Pag originated in a will from the year 999. Data on salt pans in Pag can be followed through the following years, often in wills and other documents. This was a time when salt was valued as white gold.
By the beginning of the Venetian era in 1409, there were several salt pans on the island. Besides today’s, which is the only one to have survived anywhere in Venetian Dalmatia, there were also salt pans in Dinjiška, Povljana, Vlašići and Stara Novalja. There had been dozens of salt pans throughout the eastern Adriatic seaboard, but Venice shut down all except the one in Pag to better monitor salt production and distribution. Venice took 70 % of the total salt produced, while the remaining 30 % was distributed in 50:50 shares between the pan’s owners and workers. The Republic of Venice, which ruled the Croatian coast from 1409 until its collapse in 1797, never owned the salt pan. The owners were generally nobles from Zadar but also Pag, as well as the Benedictine convent and church.
After the fall of the Venetian Republic, control of its former possessions in Croatia was assumed by Austria, which meticulously recorded the salt pans and drafted cadastral maps. After not even 8 years of rule, this area became part of Napoleon’s Illyrian provinces. The idea of a state monopoly emerged at the time: to purchase all salt pans from private owners to form one large salt production concern. Since French rule was rather brief, just short of 8 years, this idea never came to fruition. After Napoleon’s fall, Austrian authority was re-established (the second Austrian reign) which carried forward the idea of purchasing private salt pans. A state monopoly was created, generating far higher revenues, although the workers did not prosper, so the first strikes were staged.
During the time of Yugoslavia (first and second), salt production remained under state ownership (monopoly), but since the emergence of today’s independent Croatia, the salt production facility on Pag was privatized and is owned by the agribusiness concern Agrokor.
(Source pag-gradzdravlja.eu)